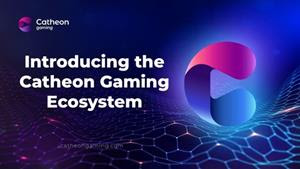 The Catheon ecosystem is expected to be one of the industry’s deepest and most comprehensive, with four key pillars:

Catheon Gaming is growing beyond the single-title approach of many existing projects by creating an ecosystem that will endure beyond the life cycle of any one game. Based on a unified platform and token, the ecosystem will connect the experience of playing individual games in a way that is only possible with blockchain technology and drive significant synergies between the different segments of the ecosystem. More information about the Catheon Gaming ecosystem can be found in the presentation and white paper and via the CEO’s announcement.

Catheon Gaming also announced the release of its universal utility token, Catheon, which will be used across the entire ecosystem. This will be done by an effective rebrand and relaunch of the existing SolChicks CHICKS token. With the entire Catheon Gaming brand and portfolio behind it, Catheon is expected to be the ecosystem token with more utility and development compared to any of the other similar blockchain gaming ecosystems.

There are several compelling drivers behind the rebrand:

As the Catheon network, community and the number of titles continue to grow, Catheon Gaming expects significant network effects and synergies that will help continue to accelerate the quality of the portfolio and ecosystem. With Catheon Gaming’s high-quality team and track record of rapid execution, evident in the company’s growth over the last 11 months, the company expects to continue growing rapidly as it builds out the ecosystem in the coming years.

“Since we started this project, what has also become apparent is that this project, and our vision, has expanded to be so much more than just a single game. Today, we are extremely excited to announce our biggest update yet. We have been hard at work over the last 12 months to build the foundations required for this update and are finally in a position to do so.”

“Our vision is to build one of the most comprehensive ecosystems in the industry to truly revolutionize the way we play, live and earn. We have a lot of work ahead to execute on our vision, but we are confident that we will be able to help to revolutionize blockchain gaming.”

Catheon Gaming, ranked by KPMG and HSBC as the No. 1 emerging blockchain giant in Asia–Pacific, is one of the world’s fastest-growing integrated blockchain gaming and entertainment companies. Catheon Gaming is the only end-to-end platform providing world-class technical, publishing and partnership capabilities for the world’s leading game studios, companies and brands seeking to navigate their path into Web3. By being the partner of choice, Catheon Gaming has built the industry’s largest portfolio of blockchain games and one of the deepest ecosystems to achieve its goal of being able to revolutionize the way we play, live and earn.

A photo accompanying this announcement is available at https://www.globenewswire.com/NewsRoom/AttachmentNg/eb948fb5-44f5-40aa-b3b5-e66dd9e3e698

London, July 07, 2022 (GLOBE NEWSWIRE) — Gordon Brothers, the global advisory, restructuring and investment firm, has acquired the Robyn S accommodation barge from Vanguard Shipping Limited. The firm is managing the disposition of Robyn S, which is available for immediate sale to the international marine, shipping and offshore markets. The barge was previously used […]

Immigration is Critical for the Productivity and Growth of Global Economies, According to New GMAC Report

February 11, 2020  Randomized controlled trial with up to 3,000 participants at 75 sites to compare outcomes between physiological guidance by iFR data co-registered on the angiogram (interventional X-ray image) versus the standard of care use of an angiogram alone Percutaneous coronary intervention (PCI) is one of the main treatment options to open narrowed coronary […]