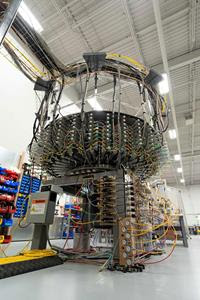 Commissioned in early 2021, the prototype machine drives a forceful, but precisely shaped, symmetric collapse of a large liquid vortex cavity in tens of milliseconds. The forces involved in the full-scale FDP compression system will be immense, pushing the limits of material science, fluid dynamics, and mechanical design. Achieving this milestone with the prototype significantly reduces engineering and technical risks for General Fusion’s FDP. It will use a collapsing liquid metal cavity to heat and compress plasma fuel to fusion conditions at 100 million degrees Celsius.

The idea of using a collapsing liquid metal cavity to create fusion has been around for decades, but General Fusion has been able to bring new enabling technologies such as high-speed digital control systems, additive manufacturing, and advanced composite materials to make this concept viable and to de-risk its implementation in the FDP. Driving a rapid, smooth, and spherically shaped collapse of a cavity created inside a rotating liquid has been a difficult engineering challenge that General Fusion has now demonstrated in this prototype machine. It is the pathfinder for a larger prototype being built in 2022 to validate further refinements to various engineering aspects of this technology.

“Net energy production is essential, but not really the ultimate goal of commercializing fusion energy, which is building economical, carbon-free fusion power plants,” said Christofer Mowry, CEO, General Fusion. “Our unique technology, two decades in the making, solves the long-standing challenges of building practical fusion power plants for the world’s energy markets struggling to move away from fossil fuels. The successful performance of this important prototype validates we are on the path to success.”

General Fusion’s unique MTF technology overcomes several key challenges of creating practical fusion energy. MTF will economically create fusion conditions, efficiently convert fusion energy into carbon-free electricity, protect the fusion machine from burning fusion plasma, and produce enough fusion fuel for its own use. General Fusion’s prototype compression system validates one of the most critical parts of its MTF technology because a mechanically collapsed liquid cavity is a cornerstone for MTF overcoming all these challenges.

About General Fusion
General Fusion is pursuing the fastest and most practical path to commercial fusion energy and is based in Vancouver, Canada, with locations in London, U.K., and Oak Ridge, Tennessee, U.S.A. The company was established in 2002 and is funded by a global syndicate of leading energy venture capital firms, industry leaders, and technology pioneers. Learn more at www.generalfusion.com.

A photo accompanying this announcement is available at https://www.globenewswire.com/NewsRoom/AttachmentNg/a8d18aac-c6fb-4486-ad73-6d0c0ea1cb81

Collaboration to pave way for responsible growth of Canadian blockchain sector TORONTO, March 08, 2018 (GLOBE NEWSWIRE) — Decentral Inc., Canada’s leading blockchain company and the creator of Jaxx, and Gowling WLG, a multinational law firm and leader in the blockchain space, have today announced a strategic alliance to optimize the many commercial and legal […]

HERZLIYA, Israel, Jan. 25, 2023 (GLOBE NEWSWIRE) — Namogoo, the world’s first Digital Journey Continuity platform, has integrated with Google Cloud to add new layers to the customer journey that digital executives, marketing and data teams are currently lacking. Namogoo provides a new generation of data points and segments that are unique in the industry […]